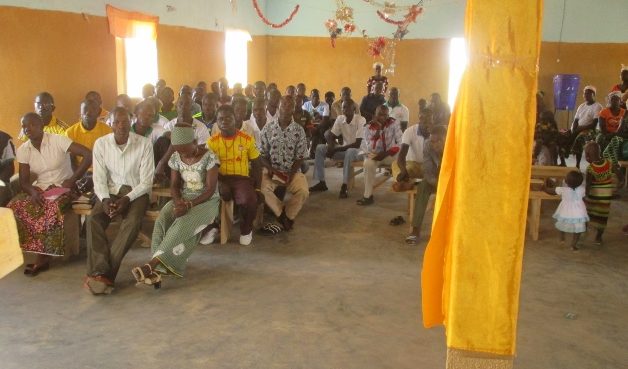 This bio actually begins in a tiny village named Djula Degan. After many failed attempts to build a thatched roof building the handful of believers decided to change locations. Land boarding the paved road in Navielgan was requested and denied. An old Community Building located behind the local marketplace was rented and church services began.

The ensuing years flamed the desire to have a worship building of their own. A small piece of property, way off the beaten path was given to the believers in 2001-2002. The initial builder did not calculate the foundation properly and before the roof was even in place, the back wall cracked and we were back to square one.

The initial mud brick worship building was too small within a year! The back wall was removed and an addition added. Within another year, that was also too small.

In partnership with 2 church-plants in Las Vegas initial ground was broken and walls halfway to the roof were managed. About this time the financial crisis hit the US. It affected us as well. We looked day after day..week after week…at an unfinished church building and the faces of a lot of discouraged believers. In our Lord’s perfect timing and at His prompting…a savings account was tapped paying for the roof and walls to be completed. All our other existing churches took up special offerings and paid for doors and windows.

A few years later, the members voted to use offering money to drywall the exterior and paint the interior. The church is beautiful..

The current Pastor is Romaric Poda. His wife is Lydie. They have 6 children.