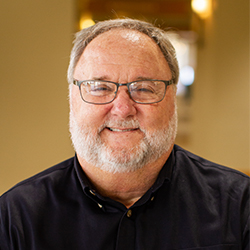 Bill Mitchell has served as Missions Pastor at First Baptist Orlando since 1993. His responsibility handles local, national and International ministries and partnerships for the church.  He says, “We have an incredible missions staff that oversees hundreds of volunteers and personnel that literally touch the four corners of the world!”  Bill also serves on Southern Baptist Mission Pastors leadership team, which provides direction and resources for Southern Baptists across the USA.
Bill has been a friend, pastor and prayer partner to Lynn Kennedy for over 20 years.  He served the ministry of Shattering Darkness as an advisor eight years and has served as Board President for the past six years.  He has a passion for missionaries and mission causes all over the world.  He has visited SD Ministries on four occasions and always considers these trips as “mountain top experiences” in missions. In 30 years of missions involvement, Bill has led over 100 trips to 20+ countries around the world.
Bill is married to is godly wife, Greta, and they have to two adult children. His son, Joshua, is married to Amanda and they live in Alabama.  His daughter, Amber, is married to Peter and they live in Florida.  They have one grandson, Luke, who is the “delight of their lives!”